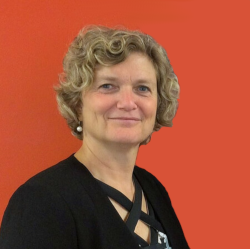 Jacquelyn brings a depth and breadth of international development and humanitarian experience to the role of President & CEO. As CARE Canada’s Vice President, Partnerships for Global Change, she built a diversified program portfolio by strengthening strategic partnerships and growing revenue through evidence-based best practices, innovation, and future-ready programming. Prior to that, as Vice President, International Programs, she led CARE Canada’s development and humanitarian programming in 35 countries and strategically positioned CARE with key stakeholders, including the Government of Canada and the academic and civil society communities.

Throughout her multi-faceted career, Jacquelyn has managed emergency relief and development programs in some of the most challenging conflict and post-conflict regions, including Sudan, Uganda after the Rwandan genocide, Sierra Leone and Somalia. She also worked for the Red Cross in Canada in a variety of positions based in Calgary, Winnipeg and at headquarters in Ottawa.

Strongly committed to the study and practice of leadership, Jacquelyn has a Master’s Degree in Leadership and Training from Royal Roads University in Victoria, BC, where she is co-chair of the Advisory Council of the School of Humanitarian Studies.