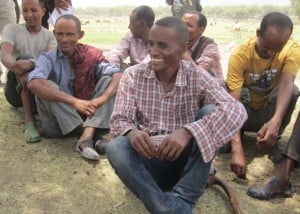 Members of the EDA-supported Yelen Queen Bee Multiplication Centre meet to gain and share technical support and build their businesses.

Ethiopia is one of the world’s largest honey producers (and Africa’s largest), and in recent years rural farmers have started beekeeping as a way to earn additional income throughout the year. CFTC’s beekeeping project with local partner Emmanuel Development Agenda (EDA) is no exception; it has enjoyed buzzworthy success since it began three years ago. Located in the Amhara Region, the Yelen Queen Bee Multiplication Centre has grown to include 45 men from the surrounding area.

Group members use both modern yellow box hives and traditional hives, which are made of straw and hang in trees. They have produced 30 bee colonies, and have sold 20 for $1,000 birr each, while retaining 10 colonies. The hives produce honey twice a year, usually in June and December, and are an important source of supplementary income for most farmers.

Tagafaw Kabede, a 38-year-old father of two boys, joined the group last September. “I joined the group so that I could produce honey and benefit from the returns. I wanted to raise additional income through diversification,” Tagafaw said.

Many members manage multiple hives, and for each kilogram of honey produced, they receive around $225 Ethiopian birr – equivalent to approximately $13 Canadian. “I have four modern beehives, and only one is in production, because three are newly established. At the last harvest I got 30kg from one beehive,” said Beletew Kefelegn.

The amount of honey produced by each hive is dependent on the type of bee used and the skill of the farmer. Twenty-five-year-old Gizoaw Beshah joined the group last September, “I wanted to improve my quality of life. I learned about honey production from the training organized through the EDA-CFTC group, as well as from other farmers, and from the government.” 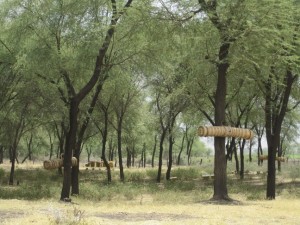 Traditional bee hives, made of thatch and hung in trees.

The goal for the Yelen Queen Bee Multiplication Centre is that each farmer will eventually have 30 beehives to manage, but for now many members will use the income from honey to support their families and improve their livelihoods. Chairperson Awolae Chew is not alone when he says, “My vision is to educate all my children up to the level they want to reach using the returns from my hives.”