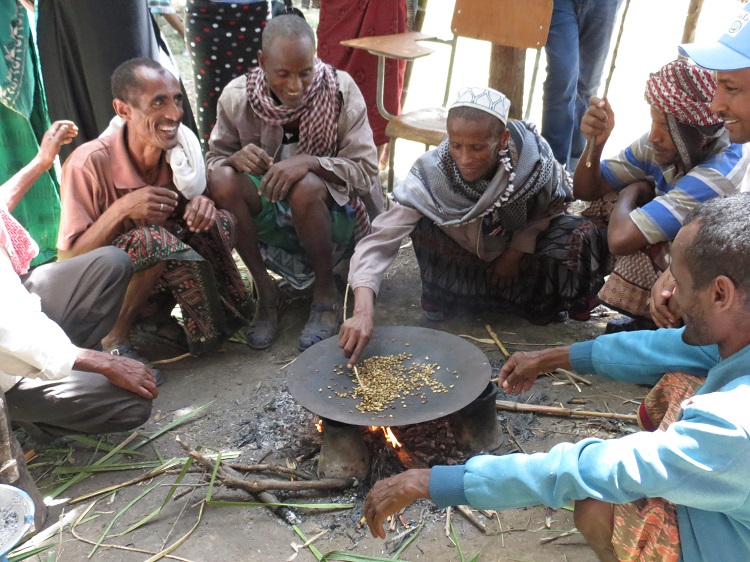 A group of men perform a coffee ceremony in the Artuma Fursi district in Eastern Amhara, Ethiopia. The ceremony is traditionally performed only by women. The men performed the ceremony after participating in MILEAR gender equality training, where they realized the value of equal partnership with the women in their lives.

Hassen and Zeyneba are a team.

Together they manage their family farm in Endo Menene Kebele, Cheffa Valley, a village about 4 hours drive from Addis Ababa in Ethiopia.

Hassen takes care of the land and manages the planting of crops like sorghum, teff and onions. Zeyneba, with her keen business savvy, manages the money and helps Hassen decide on the best crops to plant and when. They both pitch in on household tasks, including fetching water and wood for cooking.

They are happy with their life, and have built a loving, stable home for their six children.

It’s hard to imagine that just a few short years ago, life looked different for Zeyneba and Hassen. Zeyneba had almost no say in the running of the farm, and managed the arduous tasks of running the home on her own.

At the time, Hassen remembers sadly, he had a very different view of women. He told us that like many in his community, he saw women as housewives who were idle and “just at home” taking care of the children.

The family farm was struggling, and Hassen worried about providing for his family. He decided to join the MILEAR project to help him grow more food and increase his farming profits. As part of the project, he and Zeyneba participated in a gender equality training. That’s when everything changed.

During the first training session, men and women were asked to form separate groups to figure out how responsibilities were divided in the home. The men’s group came back confident that it was the men who took all of the burden. Then the women spoke.

“The men were surprised! It turns out that women are not idle housewives. It’s the reverse. Men are the ‘idle housewives,’” Hassen told us.

As a result of the training, Hassen learned that he needed to respect and listen to his wife. Zeyneba was happy to finally share equally in the family decision making – she had a lot of ideas.

The first thing she did was take a look the household finances. Immediately, she found an opportunity.

Zeyneba advised Hassen that it would be best for them not to sell their sorghum during the harvest, when prices were low. Instead, she suggested, they should hold their crop for the leaner months when prices were higher. She also investigated new crops to plant, and told Hassen that onions would be a good choice as they fetch higher prices in the market.

Thanks to Zeyneba’s input, the family now owns a cow and an ox (bull) and has accumulated a good amount of savings.

Beyond the economic gains, it’s the strengthened family ties that Zeyneba and Hassen appreciate most. The whole family is happier, they say, and always smiling. Hassen hopes that their boys learn and follow his example. Their daughters – two of whom have families of their own – have already told their parents how much they appreciate the change in their family dynamic, and encourage them to continue.

As the couple share the love within their family, they’re also spreading the love to their whole community. They lend their ox free of charge to help families who need help to plow land, and share seeds with farmers in their community who are facing hard times.

That’s how love, respect and equal partnership can change the world.