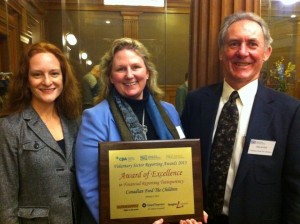 From left: Sharilyn Hale, Board Director & Chair of Nomination & Governance Committee; Debra Kerby, Executive Director; and David Pell, Vice Chair of the Board.

Toronto, February 7, 2014—Canadian Feed The Children was awarded the 2013 Voluntary Sector Reporting Award of Excellence for Transparency in Financial Reporting in its category for a second consecutive year. In presenting the award, Rod Barr, President and CEO of the Chartered Professional Accountants of Ontario (CPAO), commended CFTC for its report’s “choices and voices” theme, best practice summary financial reports, and the inclusion of stakeholder conversations and statements of impact.

“We’re honoured to receive the VSRA again this year,” said Debra Kerby, Executive Director. “2013 was a year of many milestones for CFTC, including accreditation by Imagine Canada under the new standards program and roll-out of CFTC’s climate change adaptation project in northern Ghana, with $2 million in funding by the Department of Foreign Affairs, Trade & Development – the largest grant ever received by the agency. Along with our 2012 VSRA win, these initiatives in particular were markers of CFTC’s commitment to excellence in governance, allowing us to sharpen our focus and deepen our long-term impact for the children, families and communities we serve around the world.”

The prestigious award, established by Queen’s University Centre for Governance and the Chartered Professional Accountants of Ontario (CPAO), sponsored by accounting firm Grant Thornton, and endorsed by Imagine Canada, is in its sixth year recognizing best practice in financial reporting and governance in the charitable sector. This year, 130 entrants competed in five categories.

“Canadian Feed The Children has been on a transformative journey to excellence in governance. To be recognized by the professionals on the VSRA judging committee during our pivotal 2013 year underscores that communicating the realities, risks and challenges of operating effectively in the sector is both valued and essential,” said Derek Briffett, CFTC’s Board Chair. “As CPAO’s Brian Leader said during his closing remarks, transparency is a critical strategic difference in the highly-scrutinized voluntary sector. For CFTC, transparency is not just a strategy, it is a core value – an integral part of who and what we are.”