Ghana’s northernmost regions, the Upper East Region and the Upper West Region, have climactic conditions that make living and prospering quite challenging for the rural population. The soil is shallow and not particularly fertile, and the typical vegetation is savannah-like. Rainy and dry seasons alternate, but during the long, winter dry season, from November to February, agriculture as conducted traditionally is not possible, and the men migrate to the south to find work and send money home. 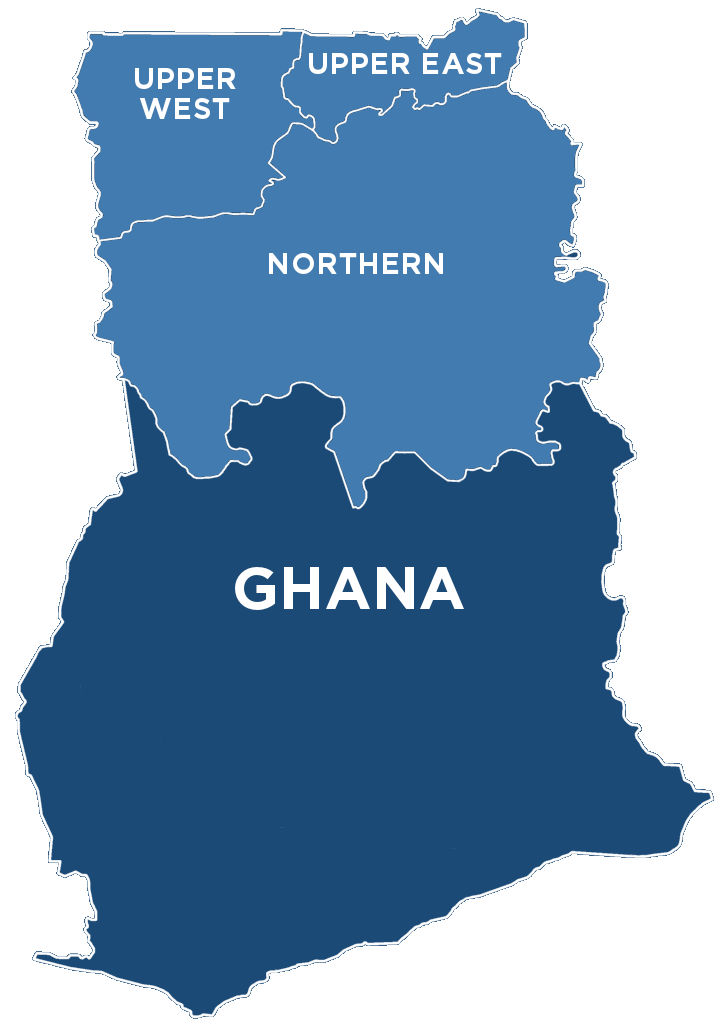 Ghana, showing its three northern regions. RESULT works in five districts in the Upper East Region, and two in the Upper West Region.

In 2015 Canadian Feed The Children took over RESULT – the Resilient and Sustainable Livelihoods Transformation project. The six-year, $19M CAD project, initiated in 2012 by the Canadian Hunger Foundation and local NGO, the Association for Church-Based Development Projects (ACDEP) is now in its fifth year. RESULT has made significant gains increasing the food security of 120,000 vulnerable smallholder farmers (approximately 21,000 households) in the northern Ghana.

While the goal of the project is the overall improvement of the farmers’ ability to earn better incomes from sustainable agricultural and non-agricultural livelihoods, a central way it achieves this objective is through the empowerment of women as farmers, earners, and household leaders.

Building women’s capacity and contribution to income generation – which includes increasing women’s and men’s commitment to gender equality – is revolutionary in a population that traditionally sees the role of women as limited to household chores, child-rearing and (essentially) unpaid labour on men’s smallholder farms. In northern Ghana, as in other parts of Africa, women and girls continue to experience great disparities in access to education, and full participation in social and economic activities compared to men and boys.

The international development world has known for a while now that the empowerment of women equals the uplifting of the entire community. UN Women asserts unequivocally that “when more women work, economies grow.” Empowering women also invariably results in healthy children. One is tempted to quote the entire, short document, but here are two more facts:

The formidable women of RESULT

RESULT focuses on building assets, skills and income in four areas: crops, livestock, aquaculture, and alternative livelihoods (chiefly through dry-season crops and artisanal handcrafts, which are pursued almost entirely by women). RESULT’s objective is for women to comprise 70% of the people the project supports, and for this support to become self-sustaining.

Read more about the tremendous growth and increased financial security of this community at the RESULT webpage, where you can also see telling images of thriving and pride.

“My mandate is to refocus our international assistance to the poorest and most vulnerable, and we have chosen to empower women. This was an amazing example … it was so great to hear them say this morning that now they have a voice.”

On July 8th, 2017, during a four-day visit to Ghana, Canada’s Minister of International Development and la Francophonie, the Honourable Marie-Claude Bibeau, visited the RESULT Ponyoro community of the Navrongo District in the Upper East Region. This was an extraordinary validation for these extremely hard-working, tough-minded women, and an eye opener for the minister, who enthusiastically tweeted: 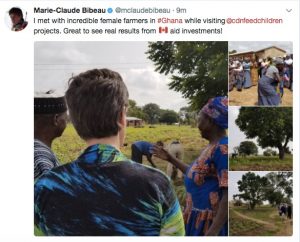 Minister Bibeau also posted a live video on Facebook in which she and Kaylyn Kyle, an Olympian ambassador travelling with the Canadian delegation, lauded the hard work and impressive accomplishments of the women they had met on the northern Ghanaian portion of the trip.

“The women and the RESULT team were buzzing following her departure. The Minister’s warm and authentic approach really made an impression, as did the simple statement of her presence as a woman in a position of leadership supporting a feminist development assistance agenda that puts woman and girls firmly at the centre for the benefit of all,” said Debra Kerby, Canadian Feed The Children’s President & CEO who – along with CFTC’s Country & RESULT Project Director, Susan Watkins, accompanied the Minister and her delegation on the visit. She wrote more about the visit here.

Debra continued: “The women farmer’s confidence and ability to articulate their personal achievements and commitment to engage in community-led development demonstrated to the Minister the cascading effect of the economic empowerment of women, with children having greater access to good food, girls especially being able to attend and stay in school, and women and men working together to achieve greater agricultural productivity and income year-round. Today I saw first-hand once again that, as Canadians, we can and do have a significant impact on the world by supporting women’s economic empowerment.”