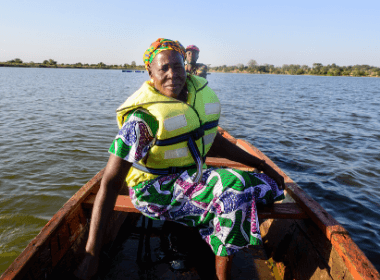 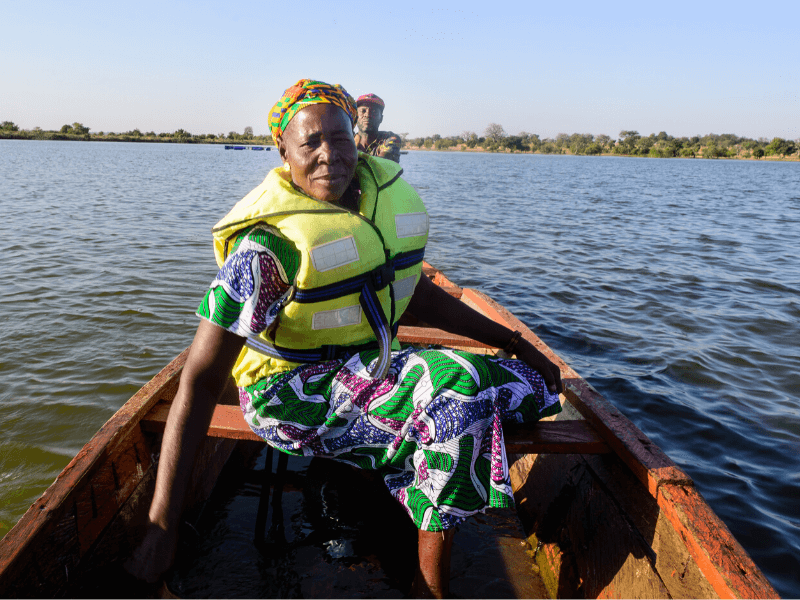 It’s the dry season in December in northeastern Ghana. Hannah Anafo, 55, is in a small canoe, wearing her life jacket and clutching a small bucket. She is making one of three short daily commutes to spread fish feed from the bucket and check up on the fingerlings being farmed in the water reservoir behind the village dam.

Hannah is among a group of residents in her community who were part of the Resilient And Sustainable Livelihoods Transformation (RESULT) project, a six-year initiative of Canadian Feed the Children, with funding from the Government of Canada.

The project ran from 2012 to 2018, reaching over 21,000 farmers across Ghana’s Upper East and Upper West regions with the goal of empowering women farmers and strengthening their resilience to climate change. 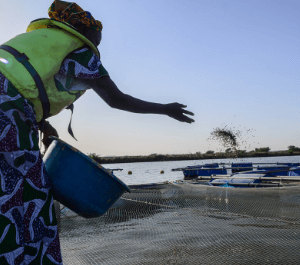 Hannah feeds her fingerlings, which when grown provide a steady income to the participants in the aquaculture group.

Hannah first heard about the project at a community meeting convened by the project’s local partners ACDEP. In attendance were the Tindanas (landlords) and hundreds of women and men from all the nearby communities.

The project aimed to help supplement the incomes of local smallholder farmers like Hannah especially during Ghana’s long dry season when very few staple crops can be grown. The project sought to improve the economic power of women and women-led households by giving them opportunities to earn an income and have greater control over their productive resources. In her village, Hannah and her neighbours formed a group of 50 people consisting of 30 women and 20 men. The group was trained and supported to start a fish farm in the community water reservoir.

Traditionally, fish farming was considered men’s work. “They told us that we were going to rear fish on the dam and we wondered: ‘How can a woman go onto the water?’” Hannah recalls. “We were all very afraid.”

But she and other women learned how to handle canoes, manage fish farms, feed the fish, harvest them, and market their produce.

In 2013 the first fish harvest was due. “There was excitement in the whole community,” she says. “People travelled from far to just come and see the fish, and the sizes were so good.”

The group sold the fish fresh to restaurateurs in nearby towns and at the local market. They re-invested their earnings in the fish farm. Women also learned about record keeping and ways to preserve fish.

Six years and many harvesting cycles later, the fish farm is still going strong. Hannah now has more resources to take care of her children and send them to school. And as the leader of her community aquaculture group, she has been empowered in other ways.

“Before RESULT, most of us didn’t have the confidence to stand in public and speak,” she says. “But due to the regular meetings that were organized for community members, I can now sit freely and interact easily in large crowds.”