Despite this, 35 per cent of new mothers in developing countries will give birth either alone or without skilled care during what is one of the most dangerous passages a woman will undergo in her entire lifetime.

For a country to prevent women and newborn babies from dying during childbirth, one of the most important investments it can make is in human resources to ensure skilled birth attendance during pregnancy and delivery. 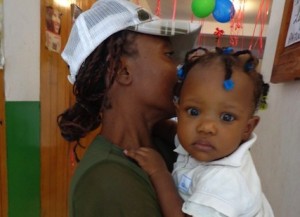 THOR, HAITI, November 30th, 2013–CFTC will be supporting OMES, our long-term local partner in Haiti, to put the final touches on a maternity clinic in a suburban area of Port-au-Prince so that it can open its doors in early 2014.

The local hospital in Thor offers only limited services, with just 30 beds to serve a population of 465,019 – making the OMES health clinic a critical supplement. While a maternity ward was built in the existing OMES clinic in 2010 to satisfy the urgent need in the community, other urgent priorities in the aftermath of the 2010 earthquake meant that it was unable to be certified by Haiti’s Ministry of Health.

The new ward will give women the opportunity to deliver their babies safely, close to home, and at an affordable cost. Plans are underway to upgrade the electrical system, purchase much-needed medical equipment including ultrasound machines, and recruit and train qualified physicians and nursing staff. Once the ward is properly equipped and staffed, it will be certified and able to start offering services – we are hoping within the first half of 2014.