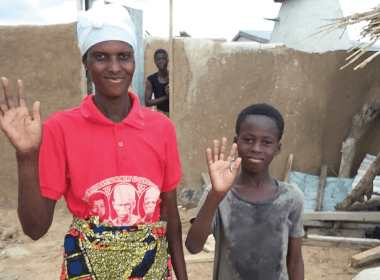 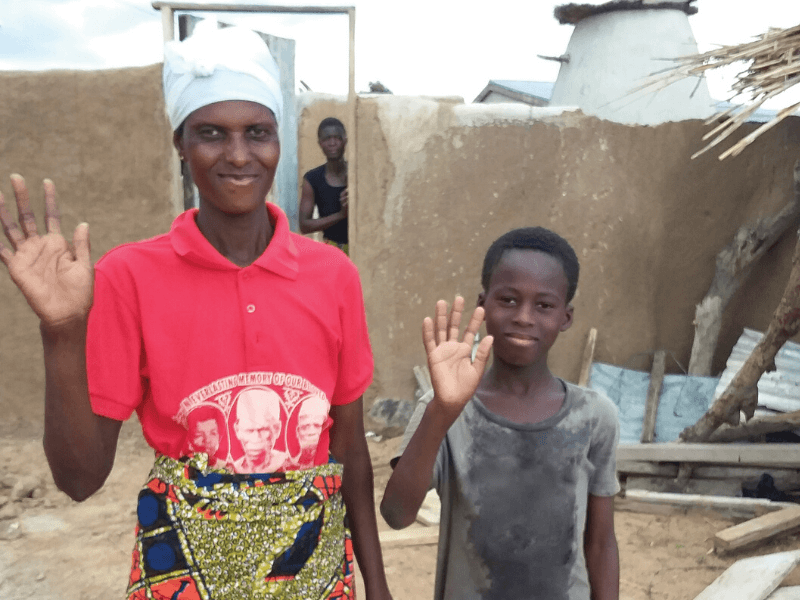 “I can have food to eat anytime I am hungry and there is more variety than before,” 11-year-old Denis from Ghana tells us with a smile. He loves to help his mom to prepare his favourite foods in the kitchen by washing dishes and pounding dawadawa for soup. But this wasn’t always the case for Denis, his mother Esther and his two siblings.

Denis’ father passed away young leaving Esther as a single mother of three children. Esther struggled to feed her family plus maintain her two jobs as a farmer and selling goods in her corner store.

“After the death of my husband, life became difficult having to care for my three children all by myself. Access to a steady income was a major challenge which meant that often times I wouldn’t be able to feed my children,” Esther told us. Unfortunately her difficulties came to a head when Denis and his siblings were forced to leave school because their fees had not been paid. 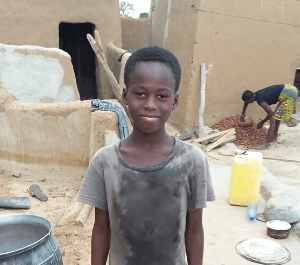 11-year-old Denis used to go to bed hungry because his mother couldn't provide him and his siblings with food. Now, Denis eats three meals a day thanks to kind donors.

This was especially hard for Denis, who at that point relied solely on school feeding for his daily meals. At school, Denis would eat corn and beans, Jollof rice, and different types of soups - but all that healthy nutrition stopped when he was forced to leave school. “I would try to manage to provide dinner for Denis and his siblings with profits from the store, but unfortunately the store went bankrupt and my son got used to going to bed without a meal,” Esther said.

Even though things seemed dire for Denis, Esther and his siblings, hope was not all lost. Canadian Feed The Children, local partner TradeAID Integrated and generous donors supported Esther by providing her with much-needed agricultural training. She learned how to cultivate crops, prepare soil as well as properly apply fertilizer.

“Participating in this program has helped greatly improve my income. I sell green pepper, okra, onions and other vegetables now that not only help me financially, but also provide nutritious food to my children.”

The learning didn’t stop with agricultural training. Esther also received skills-training in basket weaving to help her weave more intricate designs, learn how to dye straw many colours and sell her baskets to international suppliers.

Since receiving the training from TradeAID Integrated, Esther’s been able to revive her small shop and restock it through the sales of her produce. “Feeding my household is no longer a challenge,” she reported. “Denis and his siblings now eat three nutritious meals a day. Denis is back in school with a brand new uniform. My children are looking healthier, strong and nice, especially Denis who is gaining his weight back.” 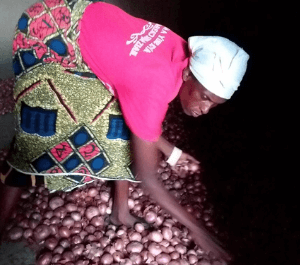 Esther shows us her large harvest of onions that she can now grow thanks to agricultural training.

The next generation is learning from their mother how to carry on the farm. When Esther returned from her training, she taught Denis how to prepare land, properly nurse and plant seeds and how to transplant crops. In addition, Denis helps out in his mother’s shop to learn the business.

For the future, Esther’s plans are to scale her farm to a larger, more commercial scale to sell even more produce to support Denis and his siblings. “I want my children to be educated and give back to the community and to the nation.”

Esther’s resilience in the face of tragedy has greatly influenced her family, especially Denis. He told us, proudly, that “my mother inspires me to study hard at school, to be motivated and to love one another. I want to follow in my mother’s footsteps and become a leader in our society.”