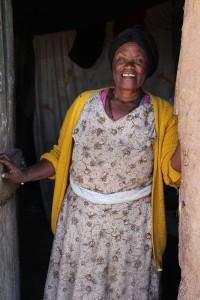 This month, we bring you an interview with Dema Kecha, age 67, a mother and grandmother who lives in a small village in a rural area outside of Addis Ababa, Ethiopia where our local partner Emmanuel Development Association (EDA) has worked for many years. Most recently, and after countless delays for government approvals, contractors to fulfill the requirements properly, and community resources committed to completing it, EDA was able to bring fresh water to Gelan Idero – alleviating an extremely long and often hazardous walk to a dirty river that residents had no choice but to use as their single source of drinking, washing, and water for animals and crops.

“The river is more than an hour away and too far for me because I am elderly and weak. I used to have to beg children to fetch water for me,” said Dema. Now, with access to a water reservoir and water points throughout the community, Dema’s life has changed considerably. “Today is our first day of regular access to water,” Dema said during an interview in late October 2014. She explains, “water so close to our homes makes the work load lighter. I also don’t have to beg children to help me anymore. I can run down to the community tap like a young woman and fetch water for myself!”

The water project involved drilling a borehole and constructing a 50,000-litre capacity water reservoir with four water points in the Gelan Idero community. Dema described the urgent need for water in the community and spoke about the lengthy process to get the new borehole, reservoir and access points completed and fully operational. “We had used the water once — but soon after [it was first opened], we stopped after discussing amongst ourselves and deciding to fence the community taps so that our children would not cause damage to the taps. We ourselves decided that this was necessary for the maintenance of the water points. So in total, today is the second day we’ve accessed the water.” 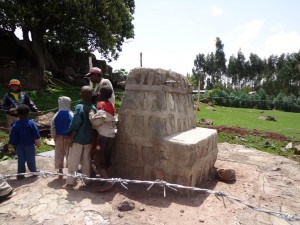 The community chose to halt water distribution until they had a chance to fence the water points to protect them from damage.

We asked Dema what her life was like before she had reliable access to the borehole. “We used to get our water from a natural spring near the Akaki River. It would take us one hour to go there and come back, and there was usually a queue of people waiting to get water. When the water ran out, community members would get their water from the Akaki River—which was unclean and not safe to drink since community members would wash their cattle and other animals in the river and the animals would drink from there as well.”

“Occasionally,” Dema continued, “we were not allowed to use our donkeys for transporting the water from the spring because the man who owns the surrounding land complained that the donkeys would graze on his land. Also, we paid whenever we wanted the spring to be cleaned. If the spring wasn’t cleaned, it would get dirty, and this brought other problems with it. In fact, there was someone [in our village] who recently became seriously sick from drinking the water.” 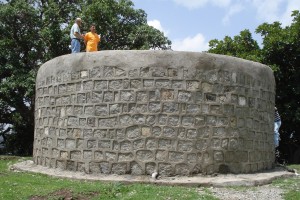 Dema explained that the clean water just outside of their homes is of great benefit especially for the older residents of Gelan Idero. “It will greatly benefit those of us who are not the strongest. Most of the work here [in the home] is done by women. The fact that we have water so close to our homes makes our work load lighter. We wash clothes, make food, and maintain the home—for all this, we need water. Now, having it nearby saves us a lot of time and energy.”

She also explained that having a source of clean water is valuable for school children. “Our kids can bottle the water to take to school every day. This enables them to stay in school and not miss classes because of getting sick. As a community, we are experiencing a better quality of life – one that we hope will last well into the future.”