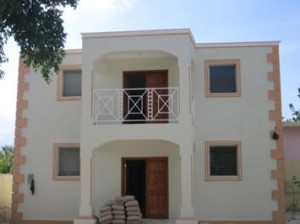 In a country where dreams are regularly dashed by disasters both natural and political, and where poverty is as unrelenting as the tropical heat, House of Hope is a beacon.  It provides hope not only to the hundreds of children who have passed through her doors – many on the way to higher education – but also to the surrounding community.

Founded in 1990 by Alice Barthole, a Haitian ex-pat then living in the U.S., the orphanage that would eventually come to be called La Maison de L’Espoir began as a residence for 10 children in Carrefour, Haiti.  By 1994 the number of residents had grown to 56 and the now-formally established orphanage received support from the U.S. military to upgrade to a new home in La Plaine. The number of children who needed help continued to grow, reaching 87 by 2000 when House of Hope was again relocated – this time to Gressier, southeast of Port-au-Prince, where it was standing on January 12, 2010, just 12 kilometres from the epicentre of the magnitude 7.0 earthquake. 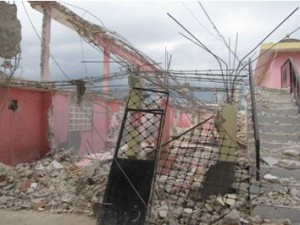 Before: The girls’ dorm after the earthquake.

Just hours later, when so much had been reduced to rubble around it, House of Hope was still standing.  Shaken, but – with the exception of the girls’ dorm – intact.  There had been no injuries to any of the children or staff and – guided by the spirit and values of its founder – the orphanage opened up its doors and the few resources it had, offering hope and help to anyone in the community who found themselves suddenly in need.

From its battered-but-still-standing kitchen, staff distributed what food and water they had to those who needed it, while still providing for the 200 girls and boys under their direct care. Over the next few months, House of Hope took in additional children whose parents had died in the earthquake, and others at the request of the government of Haiti who had shut down other orphanages that had been badly damaged and whose residents, as a result, needed a new place to live.

Since the dorm was no longer safe to occupy, the girls spent the first few weeks under tents as funding and plans for a new structure were rapidly mobilized.  House of Hope’s primary funders (Canadian Feed The Children among them) quickly rallied to determine how to proceed. “As you can imagine, it was chaotic. There were multiple priorities, and the central government was in complete disarray.  Pretty much every NGO in Haiti was shifting into humanitarian relief mode. There was the urgent need to provide immediate assistance to those who had lost everything – and search-and-rescue operations had to be the first priority. But in the meantime, this orphanage that we had been funding since 1994 was in the thick of it with 200 children who needed us, and more coming in the doors,” reflected Debra Kerby, CFTC’s Executive Director. 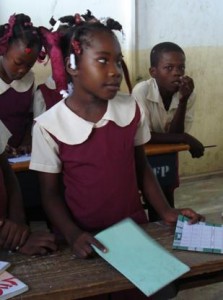 House of Hope has a strong focus on education. Classes continued in a temporary building while the new dorm was being constructed.

With an influx of donations from generous donors anxious to help in the immediate aftermath of the earthquake, CFTC began the process of scoping, planning and funding a new girls’ dorm.  The 100 or so affected girls moved into the school building, and the school was relocated to a temporary shelter so that classes could continue. There were enormous complexities to confront, not least of which were the conflicting priorities that often emerge when balancing immediate and short-term needs with a long-term development sensibility.

“There was great pressure to do something quickly.  We debated different approaches:  do we send in a pre-fab building? Could we even get it into the country given that priority was naturally being given to food, water and medical supply shipments? Could we build from scratch – and if so, how would we do that, seeing as how every road was strewn with rubble, and supplies and contractors would be scarce if not impossible to source?” said Francoise Briet, CFTC’s Program Manager for Haiti responsible for overseeing the project from a local development perspective.

In the end, the approach that was chosen was both innovative and principled, and although it took longer to plan and implement, it will have far-reaching and long-lasting benefit.  Most significantly, it focused on sourcing and contracting local workers and locally-available resources to rebuild – consistent with CFTC’s longer-term strategy to build capacity at the community level instead of imposing an external solution. 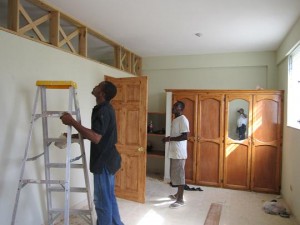 FICOSA workers put the finishing touches on a House of Hope dorm room.

In May, 2011, the old and damaged dorm was torn down and the ground prepared for the new structure. Local contractor FICOSA – Firme de Construction et de Service Agricole – was selected through a competitive process to oversee the construction of a new two-story residence built to the highest standards for earthquake resistance – and beautiful as well.

FICOSA  is based in nearby Delmas, Haiti, and has extensive experience in reconstruction.  It has collaborated with Red Cross Haiti, the Faculty of Sciences Haiti and CHF International, and has been contracted by prestigious international agencies like the Pan American Development Foundation (PADF) and the Clinton-Bush Haiti Fund. FICOSA’s strong record of achievements and experience made them the right choice, which was proven repeatedly during the project as they managed the many challenges that arose with skill and diplomacy. 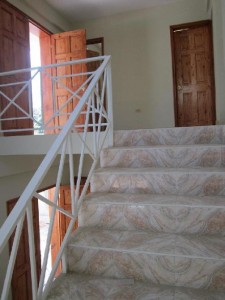 Pride of workmanship is clear throughout. And the building is built to exceed code with respect to earthquake resistance.

FICOSA estimates that about 130 craftspeople and workers from Port-au-Prince and surrounding area were employed directly and indirectly over the course of the eight-month project, in addition to their own staff of 70.  The focus on employing local workers provided a much-needed economic (and emotional) boost to the community as they struggled to rebuild.

The local workers included  several older students from House of Hope, who got a taste for the construction trade, as well as some valuable employment experience and vocational skills out of the process. Geneste Asmane and Joseph Markenson worked for three weeks with FICOSA in October, 2011, working side-by-side with the tradespeople on odd jobs that included sifting the sand for concrete mixing and pouring; moving cement, mortar, building supplies and equipment around the work site; and once the structure was raised, cleaning the rooms in preparation for painting and woodwork to be completed.

They received 250 gourdes per day (approximately $6.40 CAN), which they intend to “share with the other children. We will buy candies and pop for them. And for ourselves, some underwear, t-shirts and jeans,” said Geneste. 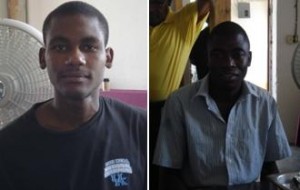 Geneste Asmane and Joseph Markenson agree that staying in school offers the best hope for their future!

The boys agreed that the manual labour was hard work and maybe not a long-term career goal they intend to pursue! “It helps you to think about your future. I need to go to university if I don’t want to continue this kind of job,” said Joseph.

These boys have their sights set higher.  Geneste would like to be an agronomist and Joseph would like to be an electromechanical engineer.  With the foundation House of Hope has provided, their dreams have every chance of becoming a reality. Just this past summer, “Mom” Alice stood proudly beside five of her former students as they graduated with university degrees.

And in January, 2012, cradling her own adopted daughter and surrounded by a dozen girls and boys of House of Hope, Alice watched the finishing touches being applied to the airy, light-filled building that would soon be filled with 100 giggling little girls – eight to twelve for each bright and spacious room – and all of them safe, secure and surrounded by love … and hope.