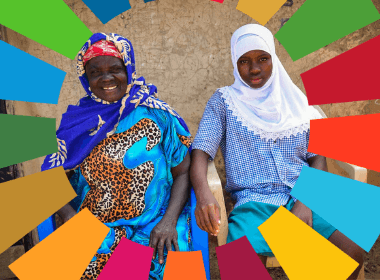 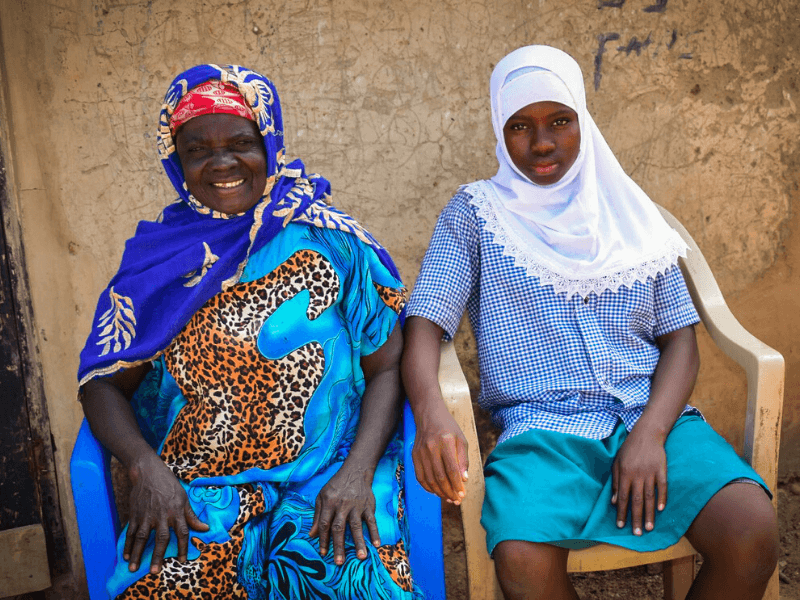 EDITOR’S NOTE: Since we wrote this article in Janaury 2020, the COVID-19 pandemic hit and worsened food insecurity, decreased children’s access to education, and set back gender equality for years to come. The Global Goals have never been more important than now. Working towards achieving the goals is imperative as they provide crucial framework for COVID-19 recovery and beyond.

Mata is a farmer, entrepreneur and mother of six, including 12-year-old daughter Fahima. She and her family live in a town close to Tamale in northern Ghana.

Not too long ago Mata and her husband found themselves unable to support their family. Mata’s husband was the main income earner, and as a family they were doing all the right things. Because her husband’s farming yields and income were low, Mata took on some labouring jobs for other farms. They faced a common problem among farming families in the area – the hunger gap. They could not stretch their income or yields enough to feed their family all year long, and often faced periods of hunger between harvests.

Still, the family was managing to get by. They farmed their land according to the natural rhythm of the seasons, rainy and dry, which had worked for them for many years. Pests were easily managed. But then, the rains changed.

“Yes, the weather has changed. The time we need rain, it does not rain,” Mata told us.  “It is difficult to predict the rainfall pattern now. The influx of strange pests and diseases is alarming.”

In the northern regions of Ghana, agriculture is the main source of income for most families. With many farming families already living in poverty, climate change is not a distant future threat but a present, destabilizing reality.

The irregular rainfall and pests took an immediate toll on the family’s already unstable finances and food security. To deal with the army worm, a pest that has devastated crops in over 40 African countries since 2017, Mata’s husband reluctantly applied potentially unsafe chemical pesticides. It did not work.

“The quality of the produce – pepper – was poor as you could not preserve fresh pepper from affected farms to more than two days. This had a negative impact on our yields, quality and prices and it reduced our income levels.”

With no money coming in, the family experienced severe food insecurity. The stress took a toll on their marriage, and her husband felt the heavy burden of not being able to provide for their family on his own.

Crop failure worsened their poverty, putting their daughter at risk

And then there was Fahima. Although she and her siblings still attended school, the cost of their education became almost impossible for the family to afford. Mata was not able to provide breakfast for Fahima and her siblings before school, and Fahima often missed classes due to sickness as a result. 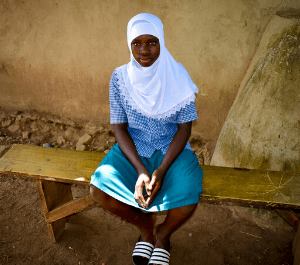 Many young girls like Fahima are subject to dropping out of school due to poverty. This puts them at risk of child migration which can have devastating consequences.

Access to education is also limited, and many children, especially girls, do not finish school. Many girls like Fahima are forced by their circumstances to migrate to cities for work, only to encounter even greater challenges such as homelessness, trafficking and violence.

But thankfully for Fahima, this would not be her fate.

“I learned to be climate smart,” Mata told us.

Mata and her husband joined a program run by Canadian Feed The Children’s partner, RAINS. The program’s main focus was on climate-smart farming, and their training was extensive. Mata absorbed as much as she could. She began using early yielding, certified climate-smart seeds that withstood the erratic weather. To reduce soil erosion, she learned to plough across slopes, as well as plant in rows. She also learned crucial pest control techniques – including managing army worm – and about harvest management practices to reduce food waste.

In the past, Mata would only produce groundnuts on a small plot of land, harvesting about six to seven bags per acre. Now she harvests nine to ten bags of groundnut, three bags of soya, and two bags of beans – an incredible increase in yields. They are not only able to feed their family through the hunger gap, but they also have a surplus to sell. Their income rose, and their financial security increased.

The training made an incredible difference to their farming, but this was a whole new world for Mata in another crucial way. The Ghana Food and Agriculture Sector Development Policy has acknowledged that women in northern Ghana do not have the same opportunities to earn income as men, making gender an important dimension of poverty. For Mata, getting involved in producing soya beans, maize and beans as a woman was unheard of as these were considered to be men’s crops. Seeing the results of participating fully in the family farming efforts changed her outlook on gender roles, and has had an impact on her husband too. Mata reports that peace has returned to their household, as her husband no longer needs to shoulder financial burdens alone.

“My husband is now feeling my impact and contribution to the family. I have a say in the house and in issues of importance to this family. I am also able to support my extended family members and have economic power to buy what I need.” 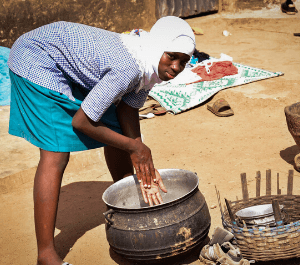 Climate smart farming helped Fahima’s entire family. Not only does her mother Mata earn enough income to feed her children, but Fahima can continue her education.

As for Fahima, her education is now easily paid for, and she no longer goes to school hungry. She wakes up to a healthy, nutritionally balanced breakfast and knows that when she makes her way to school, lunch and dinner will be waiting at home.

She is rarely sick these days, and so does not miss school as she once did. Fully focused on her studies, Fahima especially enjoys learning English, reading and writing. She knows that a good education will help her to achieve her dream of becoming a doctor. For that she says, “I want to study hard.”

Mata and Fahima’s family story may be theirs alone, but it mirrors the stories of millions of families around the world. Climate change had a disastrous effect on their food security and livelihood, and threatened the children’s education. Limiting societal norms around gender had also taken a toll on the family’s income and wellbeing. Their journey out of poverty has started with addressing each of their intersecting challenges all at the same time – the concept at the heart of the Sustainable Development Goals or Global Goals.

For Canadian Feed The Children, applying the framework of the Global Goals has helped thousands of families in communities around the world begin their journey out of poverty. But we know we cannot do all of this work alone.

We have ten years left to achieve Agenda 2030, and by many indicators, we are behind schedule. For the first time in 30 years, hunger is rising, with 820 million people worldwide affected. Climate change is leading to more severe weather events, destroying ecosystems, livelihoods and economies. Only 66% of countries have reached gender parity in primary education, and 132 million school aged girls remain out of school. This means only one thing: we need to take more action, together.

In the end, that last SDG (Goal 17: Partnerships) connects everything else. It’s the partnership between Canadian Feed The Children, our partner RAINS, Mata and Fahima’s community, and the family itself that helped make this change possible. Sustainable change for this family and millions of others will depend on partnerships to address climate change, gender inequality, food security and access to education on a wider scale. Where do you fit in with this partnership? We still have time – let’s connect.