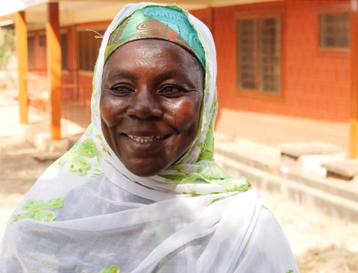 In the past 15 months, Fairuza Sulemana has learned how to farm. True, for years she’s grown groundnuts to sell to other women and supplement nutrition for her own family, and she’s worked alongside her husband who grows crops for commercial sale on a large plot of land in Ghana’s Northern Region. She’s no stranger to agricultural work, but never before has she considered it a valid – and valued – income-generating occupation of her own.

Promoting women’s participation
These days, thanks to the CHANGE (Climate Change Adaptation in Northern Ghana Enhanced) project, Fairuza is now the leader of a farmer-based organization (FBO) in Zoosali. Her group, comprised of 32 women and eight men, is one of 112 new FBOs established in 17 communities in Ghana’s Northern, Upper East and Upper West Regions.

Fairuza now has more say over what she plants, when and how, and inspires other farmers—primarily women like her who previously cultivated crops only for their own household use, but now earn livelihoods from them—to do the same.

“Before, we did not know that a woman could participate in farming activities, but the project has educated us. RAINS [Regional Advisory Information & Network Systems, CFTC’s implementing partner in the Northern Region] has encouraged us to cultivate crops that meet the dietary needs of our communities. I cultivated yellow maize and Bambara beans last year.”

The women of Zoosali and four other nearby communities have brought four types of indigenous seeds back from the brink of extinction, including the Bambara beans that Fairuza and many of her fellow farmers prefer. They’ve learned techniques to maximize crop yields despite the ravages of climate change in northern Ghana, where 85% of the population relies on smallholder farming for livelihoods, and where unreliable rains, drought and flooding, deforestation and dramatic loss of soil fertility are causing widespread food insecurity, hunger, and growing rates of malnutrition among children.

Women, with their joint dependency on the land for food and income and on their husbands for access to land and the products from it, are especially vulnerable to the impacts of climate change – and therefore specifically targeted by CHANGE for interventions. The gender composition of Fairuza’s FBO is no accident. The new FBOs have a goal of increasing participation by women, and achieving gender parity in leadership roles. The same is true of the climate-smart agricultural training, a central component of the program.

From scientists to the field: spreading the word on climate-smart agriculture
CHANGE’s technical partner, the Savannah Agricultural Research Institute, has trained a team of 12 Ministry of Food and Agriculture (MoFA) agricultural extension agents and 17 community extension agents (again, with a focus on increasing women’s involvement) to deliver stepped-down training in climate-smart agricultural practices across the regions. Radio broadcasts of the same information, with local weather forecasts and market prices, extend CHANGE’s reach and relevance even further. 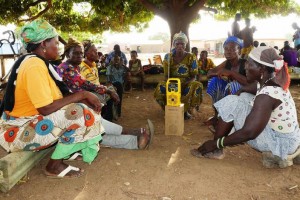 In Zoosali, Fairuza has attended each training, along with several learning sessions held by CFTC in the Northern Region’s capital, Tamale, to consolidate learning and ensure that women’s voices are heard at the planning and decision-making levels. “We have learned so much. We are using indigenous seeds and other climate-smart farming techniques that MoFA has taught us. Being part of CHANGE is increasing my capacity and ability to take care of my children,” said Fairuza at the most recent forum held on April 30, 2014.

Climate-smart agriculture techniques are now in wider use throughout Ghana’s northern regions, like returning agricultural residue back to the soil after harvest instead of burning it, ploughing across the slope instead of with it, and planting, spacing and growing early-maturing, naturally drought-resistant varietals, tested on experimental plots in each community to gain early buy-in from farmers.

These techniques are feeding the soil, as well as the families of the Upper East, Upper West and Northern Regions.

And they are doing more: they are empowering women and improving their status in their communities.
Fairuza’s new skills, increased ability to contribute to the household expenses, and most of all, her blossoming self-confidence, have made a big impact on her life and those of her five children. “I no longer quarrel or argue with my husband,” said Fairuza. “Before, I had to rely on my husband to provide food and money; now, I get up, I have food from my own harvest, and I can cook something for my children to eat before they go to school. I’m very happy that I’m able to provide for my children without having to depend solely on my husband all the time. We’re excited about all that CHANGE is bringing to our communities.”