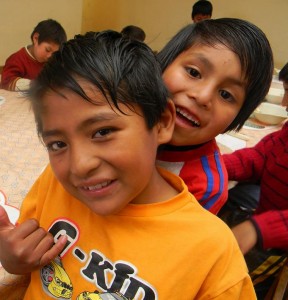 The amazing resilience and spirit of these Bolivian children, survivors of the streets of La Paz, shines in their eyes.

The last leg of CFTC’s Bolivia donor tour has Lisa and the group touring Marcelina House, a transitional home run by Canadian Feed The Children’s partner, Alalay. Marcelina House is one of the key entry and graduation points for homeless children and youth in the centres where Alalay works. With the compassionate, structured care of staff, children from some of the most desperate circumstances find safety, shelter and a new life. The stories of what these children have experienced, shared so openly and with such trust, and the joy and resilience they demonstrate despite their early struggles, is a deeply moving experience for Lisa and the group. ~DDK 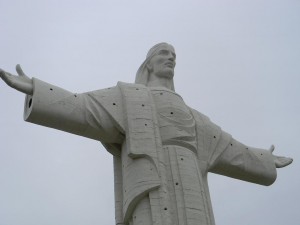 Largest statue of Jesus Christ in the world and one of Bolivia's best-known sights.

La Paz, Bolivia, Sept 24, 2011–Unfortunately, our trip to Karpani was cancelled due to snow on the road. Although odd for this time of year, the tight and winding dirt roads were just too much of a risk to take with a tour bus. Thankfully, we had a wonderful tour guide who, with some quick thinking, took us to see one of Bolivia’s most well-known sights, Cristo de la Concordia, the largest statue of Jesus Christ in the world (standing at 34 metres) and to a quaint little colonial town outside of Cochabamba. We finished off the afternoon with a visit to a convent built in the 1800s, which contains most of the original artwork and décor. The gang really got a taste of what it was like to be nun in the early 1800s in Bolivia, which was a life of isolation and devotion.

Early this morning, we left Cochabamba and headed into to La Paz – the highest-altitude city we’ve visited to date, as well as the last leg of our tour. After checking into our hotel and having breakfast, we were off to visit another Alalay location.

The first stop was Marcelina House, a girls’ home in the heart of the city. Marcelina House represents the first and fourth stages of Alalay (the stages refer to the steps in the rehabilitation process of the residents). There are four stages: 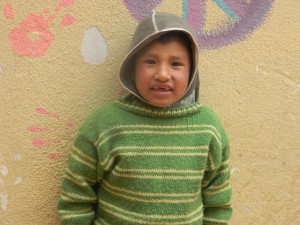 This young fellow is staying at Marcelina House among many older "sisters" until he's ready to move to stage two of the Alalay program.

At Marcelina House, we were greeted by a wonderful little boy who was staying at the girls’ house because he wasn’t quite ready to adjust to move to stage two and life at the village. For the time being, he is being spoiled by the older girls who took him in and quickly made him their little brother. After some more psychological counselling, he will be moving to the Huajchilla Village, where his older (biological) brother is currently residing.

We also met many of the older girls who are in their final stage at Alalay. One young lady, who spoke English really well, told us the story of her life. After being abandoned at a young age by her parents, she lived her early life on the streets where she was eventually taken in to the Marcelina House.

After spending some time with the counsellors and realizing that her life was worth something, she was transferred to the village until she was old enough to take up a trade and come back to the city. She is currently studying to become a community educator, and she spends her time at Alalay helping young girls who are in similar situations as she once was. 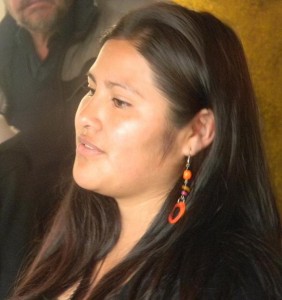 This young woman has completed the Alalay program and is studying to become a community educator to help others like herself.

She graciously and tearfully thanked the donors of CFTC for saving her life and believing in her and the other girls at Alalay, and for providing the means for them to make the most of their lives.

We also heard touching stories from some of the others girls. One bright young lady is leaving for Germany in a few weeks time to learn German though a home-stay program. Another is learning to play classical music and treated us to a violin solo. One girl is learning to be a chef, and two more are studying office administration.

These girls were once homeless, living on the streets, fleeing from abusive homes, sexual violence or left to fend for themselves by their parents. At one time, they didn’t have any self-esteem because in their world, no one cared about them. But thankfully, through the wonderful staff at Alalaly and the generous donors who fund these programs, these girls have been able to envision something different for their lives. They found hope and seized the chance to become productive citizens. 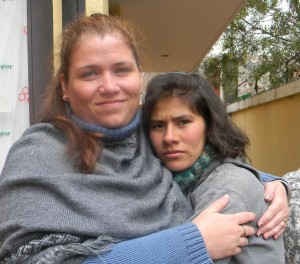 Saying good-bye to Alalay was difficult but heartwarming, too.

After a heartfelt goodbye, we left Marcelina House to visit the younger children at Huajchilla Village. A former CFTC staffer, Kristin Philpot, and her husband John Sharkey have been volunteering as house parents for the past three months here, and it was great to catch up with them. We were greeted on the road by the boys holding a welcome sign shaped like a bus, with photos of each of the delegates.

The boys were very excited; each one of us were swept away into the boys’ home accompanied by two or three of them who wanted to show us the cake they made, their rooms, their new pajamas and their toys.

After cake, we visited the girls’ home, where one little girl thanked her Canadian visitors for providing food for her and her sisters every day. We then went to visit the rest of the village which included the bakery and textiles workshops where the older children learn trades, and then to a music building that was newly built last year. The children are learning how to play various instruments after school, and one of the volunteers has begun teaching some of the children English. 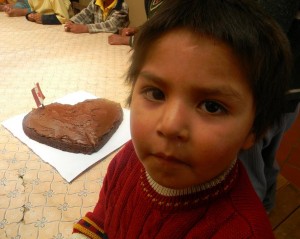 This little boy was SO proud of the cake "he" made.

We also heard some of the unfortunate stories about the children, including horrific stories of domestic abuse, abandonment, substance abuse and death. Some of these stories will live in my mind forever, but looking at the beautiful smiling faces of some of these children, I am amazed at their resilience. After spending some time in La Paz, I know that these kids are some of the luckier ones. Some children don’t escape the streets. Some children are never given the chance to get an education, learn a trade or live in a community like Alalay.

While I know it’s impossible to fix all the problems for all the children of Bolivia, I take great comfort in the fact that these children are safe. They are getting the opportunities that many don’t. And none of it would be happening without the support of people like the donors we work with. I am humbled time and time again that so many people in Canada care enough to reach out to children they have never met to make sure they get a fair shake in life. So, on behalf of every child and teen I met whose stories moved me so much – to everyone who cares enough to give – thank you.