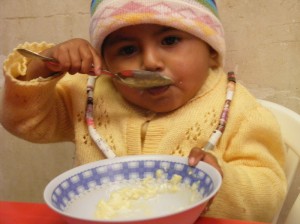 Little one lunching at NJDP!

Apologies for the delay in posting (we had some technical challenges – must have been all that great summer heat!).  Wanted to share with you the next stop on the CFTC visit to Bolivia, where Heather Johnston, Director of Programs, and Genevieve Drouin, Regional Program Manager – Americas, have visited the large urban community of Cochabamba in central Bolivia.

In Cochabamba, the focus of the visit is on CFTC partner Niño Jesús de Praga (NJDP) which runs early childhood education centres, supporting children’s early development and their parents’ education in child welfare issues.  The city has an exciting history of grassroots activism, and as Heather and Genevieve report, a strong spirit of resilience and desire to overcome the challenges of poverty as parents fight for their children’s future. ~Debra 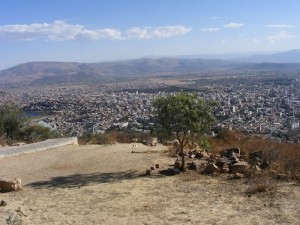 July 26, Cochabamba, Bolivia–After a half hour flight from Sucre, we arrive in Cochabamba in the morning, ready to hit the ground running. It is a bustling city, well known for being at the centre of an epic battle over water.

In 1999-2000, a series of protests took place in response to the privatization of the city’s municipal water supply, which dramatically raised water rates. The protests culminated in tens of thousands of civilians marching downtown in a massive demonstration that was met with government repression. The national government was forced to reverse the privatization, and the civilians claimed a grassroots victory that gained international attention. 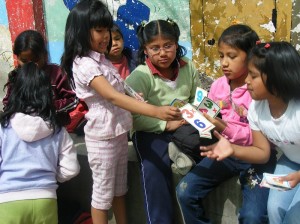 Today, there are ongoing water issues in the city. Not all residents have access to the municipal water supply, and of those that do, many only have access for several hours a day. However the protests remain a symbol of the power that people can have when they unite. Now, the second part of the process is underway: the less glamorous work of building the systems and making the concrete changes that will improve the lives of the people who fought so hard to have their voices heard.

In downtown Cochabamba, after some unexpected detours, we find our partner NJDP (Niño Jesús de Praga), whose staff and children welcome us warmly into the centre. 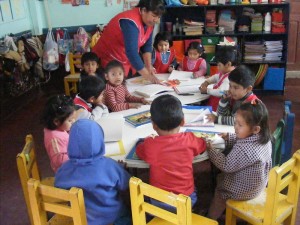 Just some of the 500 children at the NJDP centre.

NJDP provides early childhood development and after school support for over 500 children aged newborn to 15 years. In addition to CFTC and other donor support, the Municipality of Cochabamba is contributing a small amount to the infrastructure and operational costs of the centre. This kind of government support is an important relationship for the centre’s long-term sustainability to best benefit the children.

NJDP’s work is crucial to giving children an even playing field regardless of their families’ economic situation. The centre provides these children with adequate nutrition, learning, and other support needed to break the cycle of poverty, giving them the foundation to become strong contributors to their communities over the long term. 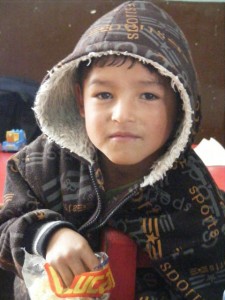 Many of their parents fought for this future when they united in the water conflicts over 10 years ago. The struggle then and now is about more than water: it’s about winning a space where positive change can happen and creating strong futures for all children.

There is strength in this city that has been tested to the core. That strength is now being channelled into the future of Cochabamba’s girls and boys.

With the work of partners like NJDP, the positive engagement of the Municipality of Cochabamba, and the strong will of parents to see their children succeed, there is no doubt that the impact will run deep.

Our next stop will be La Paz – up into the Andes.  More great learning ahead!