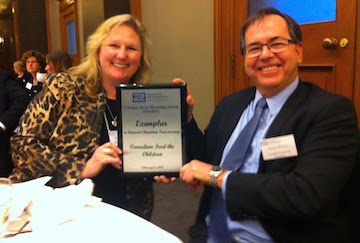 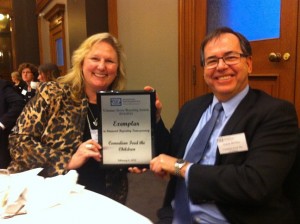 Toronto, Feb. 11, 2015—Canadian Feed The Children (CFTC) is thrilled to announce it has received its third consecutive Voluntary Sector Reporting (VSR) Award for Excellence in Financial Reporting Transparency in the category of International Focused Organizations for its 2013 Annual Report, Perspectives on the Way to Change.

The third win earns CFTC “Exemplar” status, and represents a significant milestone in the organization’s transition, begun in 2010, from a traditional charity to an international development agent of change. In 2013, CFTC became one of the first non-profits to be accredited by Imagine Canada under the rigorous Standards Program, and also that year earned the largest grant in its history from the Department of Foreign Affairs, Trade & Development (DFATD) to implement an agricultural training program which is currently supporting 400,000 smallholder farmers in Northern Ghana to achieve greater food security in the face of climate change.

“These achievements – Imagine Canada accreditation, the DFATD funding, and now our third VSR Award – are all part of the agency’s journey to change,” said Canadian Feed The Children’s President & CEO Debra Kerby. “They are critical markers of how CFTC has strengthened from within, focused our programming, and enhanced our ability to achieve our mission to reduce the impact of poverty on children with greater measurable and sustainable impact.”


“Exemplar status is conferred only upon ‘the best of the best’.”Carol Wilding, FCPA, FCA, President & CEO of Chartered Professional Accountants of Ontario (CPA Ontario)

In presenting the award, Carol Wilding, FCPA, FCA, President & CEO of Chartered Professional Accountants of Ontario (CPA Ontario), noted that exemplar status is conferred only upon “the best of the best.” Organized by the CPA-Queen’s Centre for Governance in partnership with CPA Ontario and now in its seventh year, just six organizations including CFTC have been named as VSR Award exemplars.

Canadian Feed The Children’s Chair of the Board, Derek Briffett, added: “In a world where donors have many choices about where to invest their philanthropic dollars, the VSR Awards demonstrate CFTC’s commitment to accountability, integrity and trustworthiness. We are fortunate to have a board of directors and team who are passionate about our values and driven to continuous improvement to create a world where children thrive. We thank the VSRA organizers for recognizing our efforts – and for their work to highlight best practices in communicating the voluntary sector’s value and impact.”

Read CFTC’s 2013 Annual Report, Perspectives on the Way to Change.