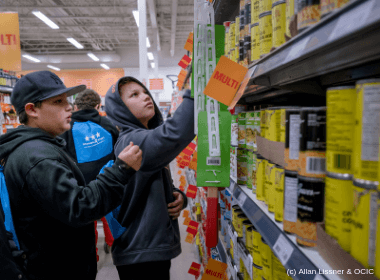 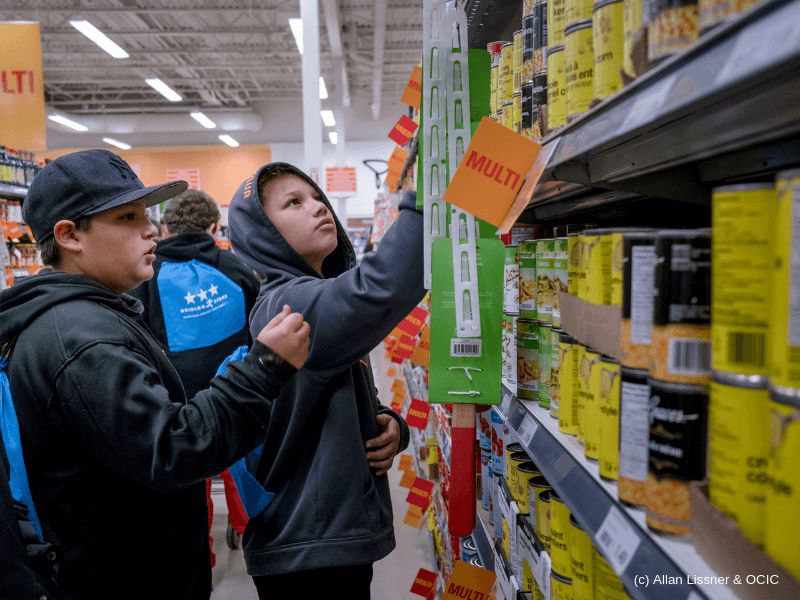 Health Canada released a long anticipated new food guide in January of 2019. Canada’s Food Guide, which hadn’t been revised since 2007, is now adorned with colourful images of real food instead of cartoon graphics, uses a “plate-model” method to illustrate portion sizing, and eliminates the familiar food groups. 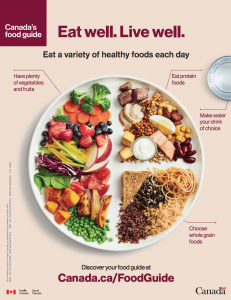 As someone who has studied nutrition and worked in the healthcare field, I was thrilled to see the changes. It was refreshing to see a distinct emphasis on how to eat not just what to eat. Mindful consumption, eating with a community, and taking your time to enjoy a meal are incredibly important factors in a holistic approach to eating.

However, the more I looked at the actual foods that were beautifully displayed in the new Food Guide, the part of my food security-cognizant brain started thinking: how could someone who was food insecure consume half a plate of vegetables every single day when fresh produce can be quite expensive? What impact would the changes have on different cultural groups within Canada and, given CFTC’s work with Indigenous Nations, on that population in particular?

Nutrition, or the lack thereof, has been a painful history for Indigenous Nations and still continues today. Traditional diets and Indigenous ways of eating were colonized through residential schools, with an emphasis on colonial foods that lacked nutritional quality and quantity. Dr. Ian Mosby and Dr. Tracy Galloway, in their study for the University of Toronto on the effects of residential school diets, determined that the malnourishment prevalent in residential schools leads to height and growth stunting which increases childhood obesity and insulin resistance. This results in a higher incidence rate of type 2 diabetes, altered thyroid function, and many other immunological deficiencies.

“The effects of childhood undernutrition are not limited to the life course alone. Infants born to women whose obesity and diabetes arose through childhood undernutrition are more likely to experience intrauterine growth failure, both low and high birth weight and growth faltering, and they are more likely to go on to develop insulin resistance and diabetes as children, youth and young adults. And these effects are not limited to the second generation: studies showing the developmental consequences of hunger (elevated body mass index and risk of obesity) in the adult grandchildren of the famine survivors.”

The generational effects of malnutrition from residential schools can be seen today in Indigenous communities since there is an increased prevalence of obesity, heart disease and type 2 diabetes. So, when thinking about Canada’s new Food Guide and the emphasis that is still placed on “colonial” foods, how does this impact Indigenous Nations and their diets?

WHAT DO THE EXPERTS SAY?

I spoke with Registered Dietitian Alanna Remmen, who works for a community health centre in Beardy’s and Okemasis’ First Nation, one of CFTC’s partner communities in Saskatchewan. I asked Alanna how she feels about the new Food Guide and how well she thinks it addresses food insecurity and the dietary needs of Indigenous Peoples.

KJ: As a dietitian, what do you think of the revamp of Canada’s Food Guide (CFG) for this day and age?

AR: I think the revamp was long overdue! I’m thrilled the new CFG is based solely on science. I think it’s very important to have a Food Guide that illustrates the best diet for health promotion and disease prevention for the general population.

KJ: What are some of the advantages/improvements or disadvantages of the new Food Guide over the previous version?

AR: Well, some advantages: Did I mention it’s based on comprehensive science!? I love that the new food guide did away with juice and processed grains, as well as a few other changes. And perhaps, most of all, the written recommendations that follow the visual plate are wonderful – it is so, so important that we are all mindful of how we eat. I like that the new CFG promotes a non-diet approach, and takes into consideration the other factors that influence eating. The fact that the new CFG focuses on meal patterns vs. serving size prescriptions is also an advantage in my eyes. The old Food Guide seemed to push “eat this much to meet your micronutrient needs” vs “follow this pattern for your best health”. There are exceptions, but overall, following your hunger and fullness cues is far more important than eating a specific number of servings.

As for some disadvantages: As mentioned by many, the Food Guide isn’t realistic or appropriate for many populations. Those who are food insecure will have difficulty following the new CFG. The new CFG could have done a better job of highlighting budget friendly options like eating frozen vegetables. There are also plenty of lingering questions about how the guide will be used for different age groups as well as different cultural populations and vulnerable populations. There are still CFG tools that have yet to be released, so I’m eager to see if they help address some of these questions.

KJ: When considering Indigenous communities, how does the new CFG address the needs of this community and their diet?

AR: This is a difficult one. I think it’s important to consider all Indigenous communities have a traditional diet that is unique to them. The new CFG doesn’t look like the typical traditional diet, which we know is both culturally and nutritionally most appropriate for Indigenous populations. So in short, it doesn’t do a great job of addressing the unique needs of Indigenous communities. But that being said, I would like to see the new Indigenous CFG before making too many judgements.

KJ: Are the fruits and vegetables guidelines of half a plate per meal realistic for those living in poverty?

AR: I don’t think either version of CFG did a great job at addressing the needs of impoverished communities by itself. And no, the fruits and vegetable guidelines are not realistic for those living in poverty. I still prefer the new version however, because the wording around processed foods is too murky in the old version. Regardless, individuals living in poverty will have difficulty following the food guide, and adjustments will need to be made to CFG to encourage a healthful diet for this population. I think it’s important to remember that CFG can and should be used as an advocacy tool. If we have a tool that’s heavily based in science and promotes produce, for example, we can use it to apply for more funding for meal programs in schools, hospitals, etc. I’d prefer to have an advocacy tool that promotes the healthiest diet, however unrealistic, versus one that promotes a less healthy, more realistic diet. Why shouldn’t we be able to argue that all populations deserve access to the recommended amount of healthy foods?

KJ: What steps have you been taking to incorporate the new Food Guide into your nutrition counselling or programming?

AR: I sometimes use it when describing the recommended diet, but always with the disclaimer of “I know this is unrealistic, but it’s something to be mindful of.” I want clients to know it’s okay if they can’t eat what’s recommended, either due to financial reasons or food preferences, but that small changes that move in the direction of the new CFG are never a bad idea. This may mean something as simple as incorporating ¼ of your plate as vegetables and fruit at supper, three or four days a week, versus not having any vegetables and fruit at all. Any small, healthful changes can have big impacts! And of course, there should be zero guilt if the client can’t, for whatever reason, follow the new CFG.

Beyond the meal pattern, I love to talk about the new recommended eating habits. CFG did a wonderful job of highlighting key points regarding how to eat. These points are something I’ve always talked about with clients, and it’s lovely to have them in one succinct place. If a client either can’t, or doesn’t want to, follow the new CFG meal pattern, they can still improve their nutrition by following the new CFG eating habits.

More than anything, I plan to use the new CFG as an advocacy tool. It’s something that clearly displays the disconnect between what science recommends us to eat and what individuals and families can actually afford to eat. This disconnect is something that needs to be talked about, and is something our programs strive to address.

KJ: Do you know if there is an Indigenous version on the way? Have you any insights into the changes/aspects?

KJ: Do Indigenous communities have unique nutritional requirements that need to be considered in terms of access to and consumption of healthy foods? If so, what are they?

KJ: How does the programming you deliver address these unique requirements?

AR: The three pillars of food security are food affordability, food accessibility, and food use and the three basic strategies to address food security include short-term strategies, capacity-building strategies, and system redesign strategies. I like to focus on strategies that make a difference in the long-term, such as capacity-building and system redesign. The saying “give a man a fish, he’ll eat for a day; teach a man to fish and he’ll eat for a lifetime” is the informal motto for our programs. Each community has unique affordability, accessibility and food use barriers, and programs should be designed to meet these unique needs. For example, our Backyard Gardening Initiative addresses each of the three pillars of food security through each of the three strategies. Community members learn how grow and prepare their own food, and the long-term plan could help redesign the food system in the community. As one potential example, it could mean community members sell their produce to the schools for their meal programs. This would, in turn, promote healthier foods in the schools while also generating revenue for families to improve food security. I’m constantly thinking of ways to connect the dots between our food security programs, to make long-term, sustainable changes.